Panos South Asia’s Relay is focussing on the contentious issue of mega-dams in Northeast India. As India’s race for economic development intensifies, the country’s thirst for power generation has dramatically increased. One of the ways India is plugging this gap is through building mega-dams to generate hydro-electric power. Due to the Northeast’s topography, the state is rolling out several plans to build more dams in the region.

However, conflict has arisen between ethnic groups and with the state over mega-dams. This is because many of the proposed mega-dams will threaten people’s homes and livelihoods as well as the environment. Moreover, reports have cited that a failure to consult local communities is further fuelling resentment that may spill over into violence.

The Northeast is traditionally known as the ‘Seven Sisters’ as it was made up of seven states earlier: Arunachal Pradesh, Assam, Manipur, Meghalaya, Mizoram, Nagaland and Tripura. Now another Hilly state Sikkim is also officially part of Northeast. The region is known for its ethnic and biological diversity. Since Indian independence, the region has had a complex and violent history due to the failure of Indian State policy towards the region. Security analysts estimate that there are as many as one hundred ongoing insurgencies in the Northeast. There are several civil society movements in the region demanding political solution to these problems. Increasingly, land and natural resources are becoming major sources of conflict in Northeast India. Mega Dam construction is such an issue, in which all kind of conflicts are becoming visible. Due to the extensive experience of Panos South Asia’s Relay programme in the region, it has focused on the Dams and Development, considering its seriousness in the current development context of Northeast India, as well as the high level of impact on the human society.

As a part of Relay’s approach to strengthen media’s capacity to report research, Panos South Asia has supported the ‘Reporting research media fellowship’ aiming to contribute to quality media coverage on dams and development in the Northeast India.

Six fellowships were awarded to journalists to produce media outputs concerning social and environmental issues of the mega-dams construction for local press.

The objective of the fellowship programme was to strengthen media capacity to use research and engage different stakeholders in a constructive debate concerning dams and development, highlighting underreported perspectives for audiences in the Northeast region of India. The activities included:

Juggernaut of HE project in NE: For whose benefit. 5 September 2011. The Sentinel. Sanjay Mazumder

Hydropower from Siang – a cost to pay? 8 October 2011. Echo of Arunachal. Azing Pertin

Influx of mega dam in NE: A threat to native land. 12 October 2011. The Sentinel. Sanjay Mazumder

The Curse of Kurichu Hydro-Electric Project: Dams destroying the dreams of Sabita and all. 18 November 2011. Asom Bani. Nibha Rani Roy

Protection of Dolphin will be a subject of challenge. Asomiya Pratidin. Nayan Jyoti Bhuyan 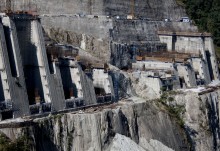