Our colleagues from Panos Eastern Africa are working hard to organise Roundtable meetings that will take place next week in Kampala and Nairobi. The events will bring together different Relay participants (journalist fellows, editors, researchers) with a wider group of journalists, civil society representatives and policymakers.

Relay’s current project in Eastern Africa was designed to improve reporting of research on the important issues of tax and governance. Roundtable meetings will serve as a platform for a wider and more informed debate, where different stakeholders can learn from each other’s experience of communicating research on tax in Uganda and Kenya.

While we are all awaiting Roundtables with anticipation, we would like to give you an opportunity to meet our Ugandan journalist fellows, read the selection of their articles and learn about their experience of the fellowship.

David is currently the Chief Parliamentary Reporter of The Observer newspaper. Lumu’s five-year experience in journalism has enabled him gain a deeper understanding of the intricate nature of Uganda’s social, economic, political and business landscape.

He has been recognized by the David Astor Foundation in United Kingdom and was a nominee for the 2010 David Astor Award that rewards journalism excellence. He published a range of articles as a part of the fellowship programme, touching on the issues of monitoring tax expenditure and foreign aid dependency.

My participation in the Panos Fellowship on the complex matter of taxation has not only opened doors to a free zone of playing with the matter but it has provided an opportunity to understand deeply taxation and how it affects governance and service delivery. I have also interacted with researchers who have shared important information about taxation–something that has given me a better grasp of the matter.

Economists disagree on what govt can do.  The Observer.  4 May 2011.  David Tash Lumu

David, currently a Senior Writer at the New Vision, Uganda’s largest multi-media house, is an award winning journalist (Financial Journalist of the year 2008) with years of proven excellence in media and communications. David has plenty of experience and possesses deep insights and understanding of the business landscape in Uganda and across the region. He is also a keen ICT enthusiast and social media entrepreneur.

The Fellowship was an enriching experience, especially the interaction with the often ignored and blamed informal sector who also have their unique story to tell.

Also very insightful was the discussion I had with renowned development/economic professor Nuwagaba who broke down for me what was the often not mentioned factors that led to the emergence of the informal sector in Uganda. He gave anecdotal examples from both a personal and academic viewpoint.

Growth of the informal sector-bringing the untaxed on board.  The New Vision.  15 February 2012. David Mugabe

Alon is a reporter with The Observer newspaper since 2010. Alon is in third year of his bachelor’s degree in Journalism and Communication at Makerere University, Uganda. He has an avid interest in public affairs reporting trying to shed light on the issues affecting the ordinary citizen. He has written a number of articles covering business, education, faith and health sections among other areas. His fellowship articles helped to demystify tax by linking it with health and education. Giving a social angle to the issue of governance generated some valuable comments and sparked a debate among readers.

Reflecting on the fellowship, it’s evident that stories have that authoritative feel when written with experts’ voices in there. Researchers can help you substantiate the information in a particular story, probably with figures and findings on a particular topic.

Through the fellowship, I was able to gain a number of contacts with some researchers, a tool any journalist would yearn for.

Milly entered the field of journalism in the early 2000. Milly trained at Rhodes University and throughout her career she has covered business and economic issues. Milly says: “I love this beat because it’s the code that binds everything, therefore one of the most influential sections of journalism.” Her article written as a part of the fellowship focussed on tax evasion, quoting research from a number of sources and giving voice to those mostly affected by the issue.

Doing Panos fellowship focusing on governance and taxation fell into my area of coverage. But I particularly liked the exposure I got while researching on my topic of transfer pricing. It’s an insightful topic given the fact that it’s relatively new in Uganda and therefore researching on it gave me an in-depth knowledge putting me at par with experts of every big issue in our economy.

Watch this space for more updates on the Roundtable events! 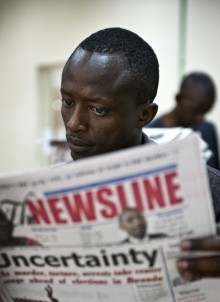