The ‘go to guy’ for tax researchers in Kenya

The most significant change from Kenya can be exemplified by the role of one of the journalists, Luke Anami, a reporter with one of the leading newspapers in Kenya, The Standard. In the beginning, Anami came out strongly as a journalist who disregarded the role of researchers and termed them as ‘unrealiable and proud people who kept research to themselves!’  He was a motivated journalist who was reporting on health and governance issues, but in his efforts to investigate one story in more depth, he tried to approach researchers at a major health research institute in Kenya but felt great frustration from that attempt.

After interactions with the Relay program and the platforms, including multi-stakeholder dialogues, training and a fellowship programme, and related networks, particularly the East Africa Tax and Governance Network (EATGN), Anami has turned out to be the best Relay journalist in Kenya.

He has made more contacts with researchers and civil society organisations working on tax issues, including Tax Justice Network Africa, the Institute for Economic Affairs, and the National Taxpayers Association.   He has changed in his perception and attitude on the role of the researchers and their potential contribution to better stories. He now takes initiative to report on tax and governance issues and investigate them.  Researchers seek him out as a trusted, professional and capable journalist to share their findings, the ‘go to guy’.

When  asked by AidInfo, an organisation working on transparency and accountability issues, to share his experience in an interview, he highlighted the critical role of Relay and how working with researchers has improved his work as a journalist.  What a change!

During this short period of time, he has also seen his career soar and has now become a top business reporter for The Standard newspaper.

Through relationships created from frequent exchanges with researchers and civil society through the Relay programme, I think Anami has exemplified how strong sustainable networks can be created between researchers and journalists to enhance research communication, which can be continued through the East Africa Tax and Governance Network (EATGN).

Watch an interview with Luke Anami 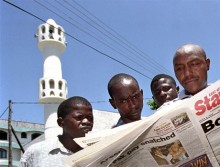 Locals read The Standard to find out news about a bomb attack that happened the day before in the city, Mombassa, Kenya / Sven Torfinn - Panos Pictures