Annie Hoban, Relay Programme Manager, speaks about what she considers as the most significant change in this phase of the Relay project:

New contacts and relationships between journalists and researchers, changed attitudes, increased motivations, career development, improved reporting of research on development issues, comments from readers, reactions from government officials…examples of all of these outcomes were shared by the Relay project team today as a result of Relay’s recent work in Uganda, Kenya and Northeast India.

After the first day of our 3-day team meeting here in Istanbul, I am enthusiastic about what we have achieved in a short space of time!  My hope for the next two days is that we can work toward packaging the stories of change, insights and lessons learned so we can share these with the project stakeholders and our partners and colleagues more widely.

For me, the most significant change in this phase of the Relay project is the increased enthusiasm and appreciation for monitoring and evaluation amongst the project team (and what we have accomplished with these new approaches and tools as a result).

At our 2010 team strategy meeting, the mention of M&E was met with groans.  I think it was seen at best as a reporting burden, and at worst, a diversion of resources away from project delivery to beneficiaries.

I think an important factor was the work the teams did with the support of an M&E facilitator at the outset of the project to better conceptualise the project’s logic and ‘theory of change’, which helped clarify where Relay’s interventions could have a measurable impact, and focus on practical and participatory M&E tools could be used to capture this.

I couldn’t have imagined in 2010 that the team would be so quick to adopt these new M&E tools and to use them and even share them more widely! 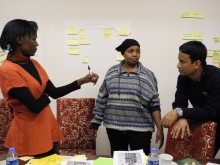